What is the Nutcracker? 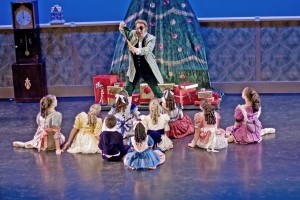 A staging of The Nutcracker, Saratoga City Ballet

Origins of the Nutcracker

The origin of the Nutcracker, a classic Christmas Story, is a fairy tale ballet in two acts centered on a family’s Christmas Eve celebration. Although there are many versions of the performance and in many forms – including our own Nutcracker in Saratoga Springs, NY – Alexandre Dumas Père’s adaptation of the story was set to music by Tchaikovsky and originally choreographed by Marius Petipa over 100 years ago. The first performance of the Christmas ballet was held as a double premiere together with Tchaikovsky’s last opera, Iolanta, around the Christmas holiday season on December 18, 1892, at the Imperial Mariinsky Theatre in St. Petersburg, Russia (Source: http://www.nutcracker.com/about-us/history-of-nutcracker).

The ballet was then performed in the US  by The San Francisco Ballet (1944) and then the New York City Ballet in 1954, when it gained immense popularity with George Balanchine’s choreography. George Balanchine, who grew up in Russia, danced the role of the Prince in The Nutcracker in 1919 when he was 15 years old. Later, after he had moved to America and founded New York City Ballet, he decided to choreograph his own version of The Nutcracker for his company. The first performance of this production was on February 2, 1954, in New York City, and George Balanchine’s The Nutcracker® has been an annual holiday tradition ever since. The production was filmed in 1993, and now people all around the world have enjoyed it on video. (Source: https://www.nycballet.com/Season-Tickets/Nutcracker-Additional/History.aspx) Imperial Ballet’s original production of The Nutcracker, circa 1900.

Today, there are many interpretations of the Nutcracker – including versions with many dance forms like Jazz, Modern, Tap and Hip-Hop. 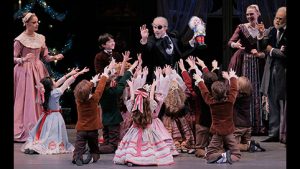 The classic score by Tchaikovsky has been performed and recorded by famous orchestras around the world. Click here to see where the Nutcracker pops up in pop culture!

Want to see The Nutcracker? It’s our 24th year!  The Saratoga City Ballet will perform the Nutcracker on December 16th, 2017 at The Saratoga Springs High School. For information or tickets call (518) 584-1895 or email us at info@saratogacityballet.com.