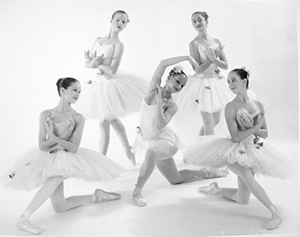 The Saratoga City Ballet Company was founded in 1994, by Patti Pugh Moore, to support the development and presentation of dance for the enjoyment and cultural enrichment of audiences of all ages. Ms. Moore directed the company from 1994 to 2003 and cultivated it from a small group of dedicated dancers into a thriving student company.  The company’s first Nutcracker was presented at the Skidmore Dance Theater in December of 1993 and has grown into a perennial favorite for local families.  Under Ms. Moore, the company expanded its repertoire to include classics such as “Cinderella” and “Giselle”, as well as contemporary ballets created by local choreographers.

Eve Whelchel and Julie Gedalecia were appointed artistic directors in 2003 and were committed to maintaining the high standards that the company is known for.  They created full-length original ballets such as “Little Red Riding Hood”,  “Snow White”, “Hansel & Gretel”, “Carnival of the Animals”, and “Alice in Wonderland”, as well as revived classics like “Coppelia”, “Pas de Quatre”, “Sleeping Beauty” and “Les Sylphides”.  They brought in noted choreographers to set contemporary and modern works which further expanded the repertoire of the company.  Until their retirement in 2014, they remained dedicated to providing young dancers with professional quality opportunities and instilling in them a lifelong love of ballet and the arts.